Mezipatra is starting today. Where to begin and what to choose from? 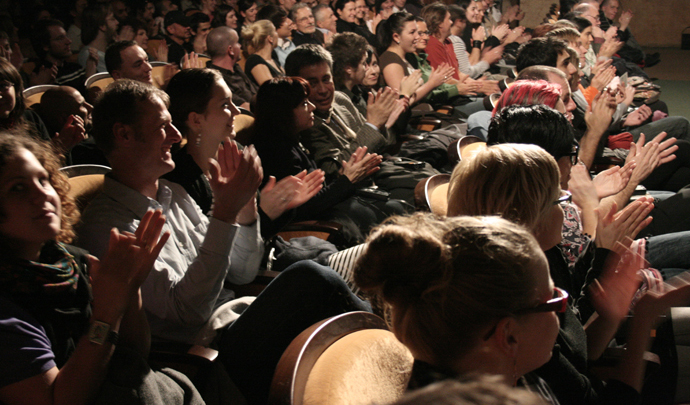 Prague part of Mezipatra Queer Film Festival is starting today, lasting till 12th November. The viewers may choose from films as well as the individual events of the accompanying program at the festival's web, in the catalogue available in Lucerna and Svetozor cinemas, where the festival is taking place, and at other selected places throughout the city.

Tickets are available at the cinemas' box offices. However, the way to make sure that the viewers get to see the intended film is online sale where tickets can be easily bought, avoiding queues or sold-out cinemas. The visitors may choose from several section, we have prepared films in the Main competition of feature films, special showings, a retrospective section, and also sections of documentary and short films. There are 66 films altogether from all over the world, many of which will be introduced by guests from abroad.

The main competition of feature films

The viewers will see 66 films altogether, all connected by the theme of The Days That Shook the World. In the feature section, protagonists will experience their personal earthquakes in independent American films such as Boulevard with the recently deceased Robin Williams and in the road movie Grandma, but also in topical dramas from exotic environments. Those are represented for example by Chilean El Club, Thai How to Win at Checkers (Every Time), or by Where There Is Shadow (De l'ombre il y a), set in today's Cambodia.

Mezipatra in cooperation with the Association of Czech Film Clubs are proud to present the premiere of the latest film by the legendary Peter Greenaway, Eisenstein in Guanajuato.

This year's retrospective part of the program contains four films from the period between 1960s and 1990s which map the development of queer cinema. A great attraction is the Friday screening of the iconic musical The Rocky Horror Picture Show from 1975. The viewers can also look forward to Antonia's Line, set in the Netherlands after the war, The Children's Hour (or The Loudest Whisper) starring Audrey Hepburn, and Kiss of the Spider Woman, set in a Brazilian prison.

Documentaries are represented by A Sinner in Mecca by the Indian director Parvez Sharma, who will come to introduce his brave and personal film about his journey to Mecca in person, the shocking Croatian Sick (Bolesno), self-ironic Do I Sound Gay? by the American director David Thorpe, and Out to Win about top sportsmen and sportswomen who openly discuss their minority sexual orientation.

In the main competition of short films, 44 movies divided into seven thematic sections will fight for victory. I Wish I Told Her... intertwines seven gentle, witty, and dramatic stories about love between women; Mirror, Mirror examines the topic of non-conformist gender identity; Ladies' Company is a selection of films with protagonists with some experience under their belts who don't perceive life that seriously; In the Darkest Hour is a collection of darker films about male sexuality.

Juries and prizes for winners

The winner of all the screened short films will be traditionally chosen by a student jury consisting of Azadeh Mohammadi (Theatre Faculty of the Academy of Performing Arts) and students of the Film Faculty, Lucie Palkoskova and Simon Holy. The prize for the best feature film will be awarded by an international jury: Skadi Loist, a queer researcher and lecturer from Germany, the Czech writer and scriptwriter Petra Soukupova, and Sasa Michailidis, a film publicist and presenter at Radio 1.

The winning feature film and the winning short film will be announced during the closing ceremony in Prague on 11th November.

During the two festival weeks, the viewers have the opportunity to vote for their favourite film through a simple grading system directly in cinemas; the winner of the audience award will be announced during the closing ceremony in Brno on 18th November.

The complete program is available at www.mezipatra.cz.