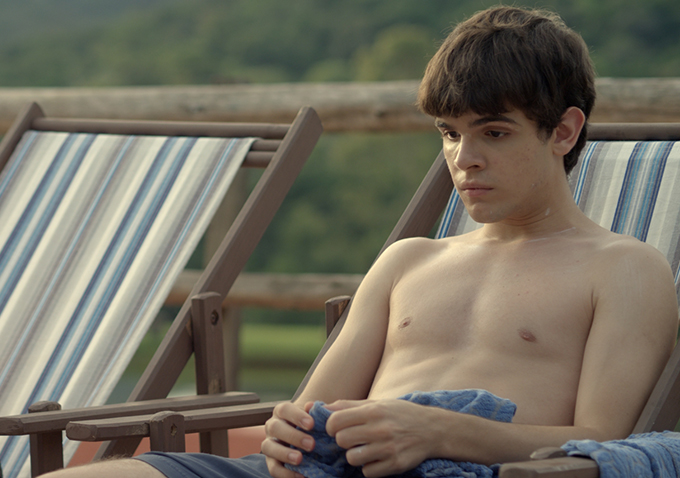 In His Eyes also caught the attention of Mezipatra’s program director, who was on the Teddy Award jury. “It’s a very well-written début with amazing acting, camera and music, and it actually has a message about growing up. And it also brings the saying that ‘love is blind’ to a whole new level.”

In His Eyes tells the story of a blind teenager, Leonard, who spends all his time either in school or with his best friend, and his anxious parents don’t allow him to go anywhere by himself.

There is a new boy in Leonard’s class whom both Leonard and his best friend like. How is this sweet teen romance going to end?

Mezipatra will introduce Brazil’s official candidate for the Academy Award for Best Foreign Language Film in its Czech premiere. Besides the first screening after the opening ceremony, there will be two others during the festival. The screenings will be accompanied by an audio commentary for the visually impaired people. Everyone in the audience will be given the option of taking a scarf to cover their eyes and experience the film as a blind person.

“People have a tendency to look at a blind person only as someone who is sight-impaired. We forget these are people with a rich life, fill of desires, including those of a sexual character. We are happy Mezipatra tries to break the taboo that is the sexual life of blind people, for example, by including this Oscar-nominated film,” says Přemysl Filip, the director of the Czech Radio Foundation.

Dozens of films from all over the world will have their Czech premiere at the festival, and the titles of these and many others, including documentaries and retrospectives, will be revealed in the coming days, Prague’s edition of Mezipatra will provide thematic debates. On Friday, Nov. 7, starting 4 p.m., Mezipatra director Aleš Rumpel will give a lecture on vampires in pop culture and their relationship with the conception of (homo)sexuality. Lucie Kajánková will talk about Czech queer films on Saturday, Nov. 8, from 4 p.m. How do they work with queer motives? Do they confirm or break gender stereotypes? The final debate, on Sunday, will be about gay marriage and will deal with the differences between a marriage and a domestic partnership. Guests of this debate will be a PROUD platform member – sociologist Zdeněk Sloboda – and Queer Leaders Forum spokeswoman Romana Schlesinger. The debate will start at 3 p.m.