Mezipatra's off program: parties, brunch, and discussions with interesting guests 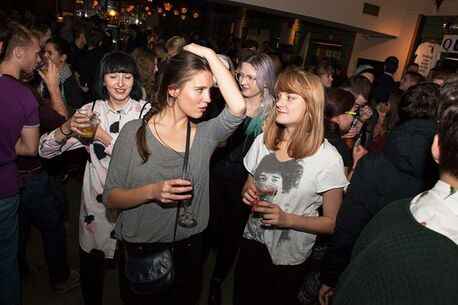 From 5th to 12th November, the festival's Prague part will offer not only films, but also four lectures and discussions with Czech and foreign guests. The accompanying program will be completed by three parties and Sunday brunch; moreover, a chill-out zone will open every evening in Lucerna café.

Talking About My Genderation discussion

The lecture and discussion with the audience will be provided by the British youtuber, activist and documentarist Fox Fisher. Apart from his own work, he will focus on the representation of trans* people in film and media, and will examine the social impact of viral videos and campaigns. Starting on 7th November at 15:30 in the small screening hall of Lucerna cinema, the discussion will be hosted by the filmmaker and co-founder of Trans*parent initiative, Damian Machaj.

Brunch and Do I Sound Gay? discussion

After the usual Sunday brunch, hosted by Café Neustadt on 8th November, a lecture by the phonetician Jan Stober and discussion with the actor Michal Kern will follow. They will ponder the question examined also by David Thorpe, the director of a film screened at Mezipatra this year, Do I Sound Gay?: why some people sound more “gay” than others, and which aspects of enunciation determine how people perceive us. The lecture starts at 13:00 and will be hosted by  the Radio Wave presenter Bara Sichanova.

A lecture by Karen Tongson

On 8th November, the viewers can also visit a lecture by the Associate Professor of English and Gender Studies at the University of South Carolina. At the small screening hall of Svetozor cinema from 16:00, she will speak about a television micro-genre that she calls “normporn”, which includes for example TV shows Parenthood or The Slap. According to  Tongson, although they seemingly examine family models which are not normative or are even queer, they actually support the feeling of superiority of heterosexual nuclear families over others.

This Kind Of Love discussion

"I am not afraid because I believe in human rights," says the Burmese activist Aung Myo Min, who will speak during the discussion after the film. In the documentary This Kind of Love, he returns after more than a twenty-year exile with a plan to to spread enlightenment amongst young people, educate them in human rights, and support the local queer community. The film will be screened by Mezipatra in cooperation with the One World Festival at the French Institute cinema on 9th November at 18:00. The discussion follows the screening.

After the opening ceremony on 5th November, and after the closing ceremony on 11th November, Lucerna café will open for all the festival fans. The parties, called Sweet Sixteen and Shake It Off, will be full of music by the DJ duo of Urxins and other DJs. The entry for both events is free from 22:30 and their partner is Jameson.

This year's main party of Mezipatra will welcome the electronic singer, musician, producer and DJ, Jam Rostron, who performs as Planningtorock. The British native lives in Berlin and is well-known for her activism and references to gender non-conformity, but also for her musical collaborations with other famous artists, especially the Swedish duo of The Knife.

Every day after the screenings, a chill-out zone with DJs or live music opens in Lucerna café. The premiere of Eisenstein in Guanajuato, which the festival will present in cooperation with  Association of Czech Film Clubs (ACFK), will be followed by dark pop, new wave and synth pop by DJs Chlorophylla von Needle, Vlada and Rapture. Tuesday, 10th November will see the performance of a queer-folk project, Shani Chabansky / A Sensitive Person.

Parties and discussion won't miss in Brno either as Mezipatra move there from 12th to 18th November, and the accompanying program will be complemented by speed dating, a theatre performance, and tour through the city.

Brno has its opening ceremony as well – it will take place on 12th November in Scala cinema, including the screening of 54: The Director's Cut. At the closing ceremony in Art cinema on 18th November, the viewers may see a retrospective film, The Children's Hour. Both evenings will be spiced up by D'EPOG theatre laboratory, local performers and DJs.

Thy stylish party, which will follow the screening of The Rocky Horror Picture Show on 14th November, is called Good VIBErations and will take place in the newly open VIBE club. DJs Urxins and Floex will come from Prague, and afterwards people can enjoy residential Saddan & Daren. The admission fee is 90 CZK.

Daisy kills time at work at a sex line by knitting a red sweater. Her routine is interrupted by a phone call of a young, inexperienced Jewish boy, Eli. The disparate duo end up at a life crossroads together. Gradually, they get closer and closer and closer, and eventually to the absolute core... The play by a young playwright, Jan Bodnar, will be performed as a part of Mezipatra by Hem'S company. The performance will take place in Trojka café on 13th November at 19:00. The admission fee is 50 CZK.

Tracing the Steps of Our Grandparents

The history and today of the queer community in Brno will be introduced by Queer Memory Centre during a scenic tour on a retro coach with several stops . The admission fee is 60 CZK and the places are limited, so it is necessary to register at  This email address is being protected from spambots. You need JavaScript enabled to view it.. The start on 15th November at 15:00 at Art cinema.

The Brno part of the festival will be closed by a panel discussion on the history of queer cinema. The speakers will be Mezipatra's program director, Lucia Kajankova, PhD student at the Department of Film Studies and Audiovisual Culture of Masaryk University, Sarka Gmiterkova,  a graduate of journalist studies at Masaryk University in Brno, Jana Jedlickova, and Eva Chlumska, a former festival dramaturger. The discussion is hosted by metro-bar.cz, starting on 17th November at 18:00.