Mezipatra QFF wrapped up its Brno part. The Audience Award goes to a “feminist fairy-tale” 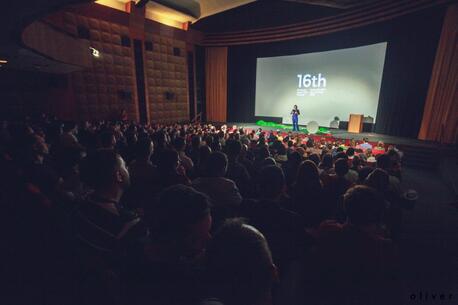 This year’s edition of the Mezipatra QFF was again a great success: over the two festival weeks, 66 queer-themed films were presented to a total of 11,700 viewers. In addition to the feature film competition and six documentary films, a retrospective section and a special screening of 54: The Director's Cut, the audience could enjoy seven short film programmes.

Audience Award and other prizes

During the Closing Ceremony of the Brno part of the festival, the winner of the Audience Award was announced – the prize went to Antonia, a drama by Marleen Gorris from 1995. This “feminist fairy-tale” about the relationship of a mother and her daughter who take over a family farm at the Dutch countryside after the end of WWII was presented as part of Mezipatra’s retrospective section. Its popularity with the Czech audience underscored the winning streak of female filmmakers who have received all of the three main festival awards.

The awards for the best feature and short films were presented to their winners on November 12 at the Closing Ceremony of the festival’s Prague part. The main prize for the best feature film went to Sworn Virgin (Vergine giurata), a debut by Italian director Laura Bispuri about an Albanian woman who, in line with the local tradition, takes on a male role, foreswearing all romantic and physical relationships. The jury’s special mention was presented to Nathan Nicholovitch’s Where There Is Shade (De l'ombre il y a).

The best short film award was received by the Swedish film, 9:55-11:00, Ingrid Ekman, Bergsgatan 4B, directed by duo the filmmaker duo, Cristine Berglund and Sophie Vukovic. The student jury's special mention was awarded to Peacock, a film about the adolescence of Czech playwright Ladislav Stroupežnický directed by Ondřej Hudeček.

The Prague part of the Mezipatra QFF hosted guests from eight countries from across the globe, most notably the director of 54: The Director's Cut, Mark Christopher, Indian documentary filmmaker Parvez Sharma, who brought his documentary film A Sinner in Mecca, and French actor David D’Ingéo starring in the lead role in the aforementioned drama, Where There Is Shade (De l'ombre il y a).

The festival also offered discussions and lectures by experts. The Prague section featured a presentation by UK’s trans* activist and YouTuber Fox Fisher, Burmese human rights activist Aung Myo Min and US queer theorist Karen Tongson. Among other topics, the focus was also on “queer” phonetics. Brno hosted a panel discussion on queer film and TV production under the title Mezipatra Talks. A great success was also a tour of places connected with the city’s queer history organised by the Society for Queer Memory, attracting numerous participants.

Although the main programme of Mezipatra QFF is now over, the festival has events to offer throughout the whole year. For the ninth time, the festival’s regional echoes will this year visit Olomouc: on November 18 to 22, following a premiere of MQFF in Liberec: on November 27 to 29. The audience in Prague is regularly treated to a series of film screenings under the title of Mezipatra Approved and in August 2016, our traditional open-air cinema will hit the town as part of the Prague Pride festival. For more details follow Mezipatra QFF on Facebook or visit our website at www.mezipatra.cz.

Further information is available at www.mezipatra.cz.

This year’s festival trailer, along with film trailers and the festival video-journal can be watched on our YouTube channel.

A photo recap of this year’s edition, film visuals and the festival’s visual identity are available for download at: https://mezimedia.capsa.cz
Login: press
Password: queer-osvobozuje

PR Contact
Larisa Blichová
739 592 931
This email address is being protected from spambots. You need JavaScript enabled to view it.