Film tips for Monday: Psychosia and And Then We Danced 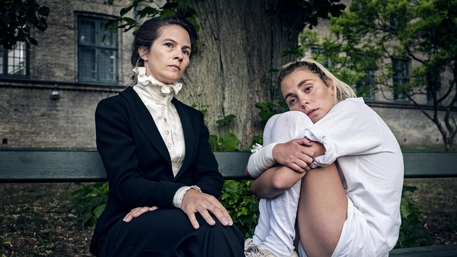 If you do not yet know what to choose for Monday night, we have two tips for feature films in the main competition: a psychological drama about love and a sensational drama from the dance environment of traditional Georgian society. We show the films in a row at Světozor cinema.

The feature debut of Marie Grahtø Psychosia from a psychiatric hospital environment builds on the genre conventions of Gothic horror and presents a story of a love attempt in which the clear boundaries between reality and hallucination blur. We will screen it on Monday November 11, 2019 at 6:15 p.m. in Světozor cinema (tickets can be purchased online).

In a sensual romance And Then We Danced, you will experience the world of Georgian society, which is based on orthodoxy, traditional gender roles and family values. Levan Akin's award-winning film beats in the rhythm of striking music and captures the desire to be free and the contradiction we can feel against our own roots. We will screen it on Monday November 11, 2019 at 8:30 p.m. in Světozor cinema (tickets for one of the most anticipated films of this year's competition can be purchased online).