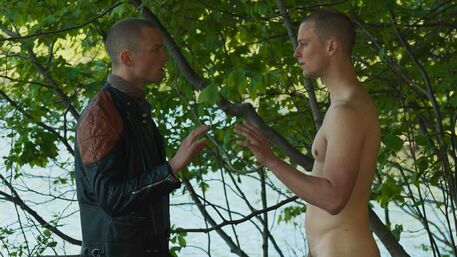 Bruce LaBruce, an icon of Canadian queer cinema, is no newbie at Mezipatra. Four years ago, he was even a member of the Main Jury. This year, the festival introduced his latest film, Saint-Narcisse. The key motives of this feature film, which premiered at Venice festival in the summer, are narcissism and twincest – incest between twins.

Throughout his career, the director has gained experience with various genres and film formats. In the 1980s, he started with low-budget Super 8mm films and continued the long journey all the way to digital technologies. In Saint-Narcisse, though, he returned to the 1970s, not only with the story, but also with the methods used, and even the crew – he involved people who were already creating in the 1970s.

Why did he set the story inspired by a Greek myth into an era fifty years ago? The main protagonist is Dominik, who can get aroused only by looking at himself. This is why he spends time taking polaroid self-portraits. “Narcissism is a norm today. Everybody is focusing on depicting themselves through their phone, people fall in love with their own images in social media. If I set the film in the world of today, nobody would find anything strange. I needed a period when smartphones hadn’t existed yet,” explained Bruce LaBruce.

At the same time, he approached his latest film as an homage to the films that were created in the 1970s. “It is my favourite filmmaking period because at that time, societal conventions were being questioned in films, as well as the conventions of film production as such,” revealed the director. His Saint-Narcisse refers to numerous films with the motive of relationships between twins or incest. One of them is also The Act of Heart by Canadian director Paul Almond, where a priest rapes a girl on the altar and she then douses herself with gasoline and sets herself on fire. “When I saw it as a kid on TV, it really unsettled me,” remembered Bruce LaBruce about the film which connects religious themes and taboos and still belongs among his favourites.

How hard was it to find the right protagonist for the demanding role of Dominik? “I had preselected about fifteen actors. Félix-Antoine Duval had the exact appearance I wanted – the classic beauty. If you’re supposed to play Narcissus, you must look like a classical Greek character. And he was also very open to the whole controversial theme that involves not only the relationship between twins, but also a relationship with a mentally handicapped priest,” says the director. It is almost unbelievable that Saint-Narcisse was the first film by LaBruce whose budget was over one million dollars.