Looking back at the past years 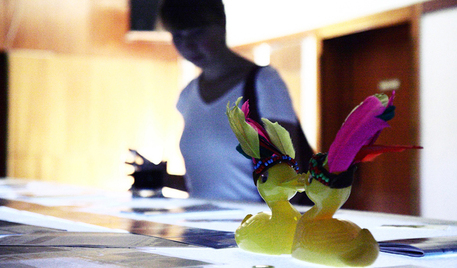 Mezipatra (English translation: mezzanines) is a space which is neither up, nor down. Whether you move upstairs or downstairs, you always meet your neighbours in the space which does not belong to either of the flats. Mezipatra (or mezzanines) have no specific owner, nor are there valid rules of one and not the other. In the mezzanine, all the differences are irrelevant, no matter which floor you came from. Simply, you are and will always be welcome!

When we decided to organise the first Czech gay and lesbian film festival in the Moravian metropolis twelve years ago, we did not assume that it would have become the biggest queer event in the Czech Republic in few years. Duha nad Brnem (Rainbow above Brno - as went the original title of the event) presented eight films and three theatre performances. Within the ten years of its existence, the festival have not only changed its name to a more apt Mezipatra, but also the number of screened films and off program events, further, it has spread into 9 additional towns and actually beyond the borders of the republic too. In the years 2007 and 2008, the so-called "Festival Echoes" ran also in Bratislava, where they gave birth to a present-day Festival Inakosti (Slovak Queer Film Festival). Mezipatra has become a natural constituent of the social dialogue concerning human diversity, which is also possible due to the fact that around a half of the audience identifies itself as heterosexual. It succeeded to provide the most prioritised value of all the enlightenment, openness and balance; Various people meet in one space, so there is no room left for a one-sided discussion in a kind of a homoghetto.

Nowadays' more than ten thousands of visitors each year is a result of a volunteer work of around a dozen of people, who organise the festival simply because they see the point in doing so. In spite of the obvious financial lack, the festival team managed to extend the event to Prague as early as two years after its first one. In 2005, the festival was already visited by eight thousand viewers, with the attendance of the foreign artists, around seventy films were screened and twenty other off program events, ranging from theatre performances, through staged readings and exhibitions, to concerts, took place. The festival program of the following years was enriched by festival exhibitions, a record-breaking fifteen theatre performances in 2006. The same year, the festival took place in Český Těšín for the first time.

"Festival Echoes" have gradually begun to please the viewers in other Czech towns as well. In 2008 they spread into Olomouc, České Budějovice and Bratislava. A German postmodern director - Rosa von Praunheim - attended Mezipatra. The festival motto of the year was "Life after..." and it presented the fortunes of the unpretentious heroes and heroines after their sex change, after the diagnosis, after the loss of a partner. The previous years had also been focused on particular topics. The first thematic year, held in 2004, was dealing with gay and lesbian parenthood, in 2006 the main theme was Puberty and a year after that, when the civil partnership law came in force, it was Rebelliousness and Raves. The reason for this came with a realisation that the local community had, for years, been asserting the image of lesbians and gays as respectable citizens who live the same way as the mainstream society and desire the same rights and institutions. However, this kind of an image is usually very limiting and sets apart the punks, anarchists, gender and sexual experimenters or basically whomever who does not fit in the norms of the "decent" society of trade economics and monogamous coexistence.

In the year 2009, the festival marked the all-time high attendance of 12500 viewers. Mezipatra entered the new decade with a change in the attribute – from gay and lesbian festival to a queer film festival. With this attribute name change we manifested what we desired since the beginnings of the festival; not to be a gay and lesbian festival only for gays and lesbians. The term queer embraces all who find the traditional gender categories too tight. The tenth Mezipatra was dedicated to gender problematic with the name World War Three of the Sexes.
The traditional retrospective belonged to the famous director Derek Jarman, one of the leading representatives of the British film. Jarman was also the first publicly-known person to openly declare being HIV positive. In addition, a successful exhibition called The Other Kind of Blue was dedicated to Jarman. The name of the exhibition was chosen as a reaction to the legendary autobiographical film Blue, shot by Jarman in his sight-losing period due to the HIV virus. Jarman depicts his experience with the therapy, evokes the fragments of memories, visions of the compelling beauty as well as the dismay of the coming end, all on the background of the shining blue projection. The project The Other Kind of Blue also incorporated the artworks of the Czech and Slovak authors Darina Alster, Radim Labuda and Tamara Moyzes, reacting to Jarman's theatrical sensuality, formal experiments or his open politicalization of gay thematic. James Mckay, the producer of numerous Jarman's films, personally visited the festival and held the place in the main jury.

The tenth year also brought an off-competition section called Queer as FAMU, where the authors personally presented their own films. 2009 also meant an exceptionally eventful program, which was opened by an exposition of Josef Rabara, Jan Přibylský and Václav Kopecký named Body. The reactions towards the photography of Jan Přibylský, which depicted male and female genitals, were so intense that the owner of the café in Brno had a part of the exposition taken down. The colourful confession of the student – the Atelier of Photography at Jan Evangelista Purkyně University in Ústí nad Labem – was, according to the author, a study of nudity as well as of the shame of the photographed, the photographer and its perceivers. Nevertheless, the authors of the exposition refused exposing only the less controversial part and decided to move the whole project to the gallery of the Old Brewery. However, the highlight of the off program was a lecture of one of the most significant American theoretician of queer and gender studies Jack Judith Halberstam, presented within the Prague series of the Queer Café.
As usual, the festival welcomed the filmmakers from all over the world to present their films in person. The best pieces are awarded prices of by two international juries ever since the fourth year. The festival awards were created by Zdeněk Vacek and Daniel Pošta, the renowned designer and winner of the prestigious exhibition Designblok. The teasers were shot by the laureates of the Jindřich Chalupecký Award - Michal Pěchouček and Radim Labuda; Mark Ther is a star too. Jan Kolář is a top graphic designer (redesign and new logo since the 10th year) nominated Grand Czech Design a Louskáček Awards for his work for Mezipatra. In 2009, besides the usual categories of three awards, Mezipatra along with the Gender Studies and the Counselling Centre for Citizenship, Civil and Human Rights announced an extra competition named Film Against Bullying, which anyone could submit their short film treating the subject of homophobia and its expressions in society to.

The main theme of the eleventh year was High Art. The contents accentuated the personalities of the exceptional artists whose off-the-mainstream work enriched or still enriches the queer culture. In 2010, we launched the co-operation with Amnesty International and expanded the "Festival Echoes" to Pilsen. The films of Matthew Bourn, who in a very brave and innovative manner transforms the classical opera art works into a modern form characterized by a captivating visuality and queer esthetics, were paid a special attention.
The traditional retrospective of Mezipatra was dedicated to an American artist and a lesbian video art pioneer Barbara Hammer. Also considered a queer film groundbreaker, Hammer has been focusing on the ever tabooed topics linked to female corporeality and lesbian sexuality. Among her most famous pictures, you could find Dyketactics (1974) and Nitrate Kisses (1992), the first feature documentary of hers, were the images of four gay and lesbian couples with the before-invisible history of gays and lesbians. Her films were presented in the most prominent galleries around the world, including Moma in New Yorku, Centre Pompidou and Tate Modern.
Apart from the filmmakers, the festival hosted foreign experts who, as usual, gave lectures within the Queer Café series. Namely, Lawrence Carter-Long, who spoke of the intersections of queer identities and life marked by a disability, and Harry M. Benshoff, the member of the main jury, with his lecture on the queer aspects of horrors.

Besides dealing with a different particular topic each year, Mezipatra are also the festival of the unique cinema premieres. In 2004 this was represented by a Spanish comedy My Mother Likes Women, two years later, by the phenomenal Shorbus of John Cameron Mitchell, who visited Mezipatra and the screening of his film in Prague cinema Světozor. In 2010, we introduced two premieres. American Howl, the reconstruction of the authentic interview with Allen Ginsberg and Heartbeats by a director, screenwriter and actor Xavier Dolan, who had already charmed the viewers of his previous film I Killed My Mother in Cannes.

In 2011, we welcomed the Hollywood star, director Todd Haynes. The year's theme was Time Travel and one could travel in time with most of the arranged pictures. The competition of the twelfth Mezipatra was won by the female rockers of the legendary band reunited after ten years. The jury awarded the Canadian film Trigger the best feature due to its brilliant dialogues as well as the apt portraits of people in their middle age.