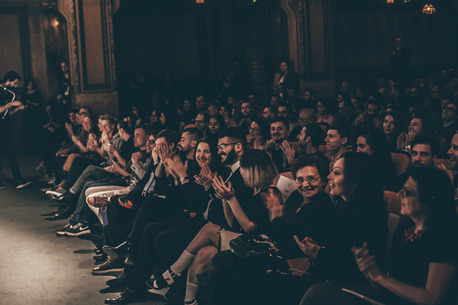 MEZIPATRA Queer Film Festival (MEZIPATRA QFF) is a specialised competitive film festival focusing on gay, lesbian, bisexual, trans and queer themed films. The aims of the festival organised on a non-profit basis are to promote quality human-interest films and to contribute to the emancipation of gender and sexual minorities in the Czech Republic.

MEZIPATRA QFF is held annually in the capital city of Prague and in Brno, the second largest city in the Czech Republic. A part of the festival program is also presented in other towns of the Czech Republic as “Echoes of Mezipatra”. QFF MEZIPATRA is a successor to the gay and lesbian film festival "Rainbow Above Brno", which took place in 2000 and 2001. The founder of the festival was the non-profit organisation STUD Brno.

MEZIPATRA QFF is organised by the non-profit civic association Mezipatra z.s., with its registered office at Francouzska 284/94, 101 00 Prague, Czech Republic.

The 23rd MEZIPATRA will take place in Prague November 3 to 10,  and in Brno November 11 to 18, 2022. The festival-related events (“Echoes of Mezipatra”) held in other Czech towns will follow the main festival program.

MEZIPATRA QFF presents selected feature films and short films as well as documentaries. The festival is open to filmmakers from all over the world. Films may be submitted by directors, producers, distributors and other legal entities. The submitted films are entitled to attend other film festivals, as well. The films in the competition will be selected by a selection committee. Selection criteria will include both the artistic treatment of the submitted film and its human-interest message.

MEZIPATRA QFF has three competitions – the films are judged by an international jury, students' jury and by the festival audience. The festival presents the following awards: Best Feature Film, Best Short Film and Audience Award. Only the films which have not been introduced in the past festival editions can participate in the festival competition. The completion year for the films in the competition(s) must be 2021 or later.

Submissions are not connected to any fee.

The applicant should deliver their submission application including the film screener on a DVD to the festival address (QFF Mezipatra, Francouzska 284/94, 101 00 Prague, Czech Republic) or an online screener via web or email no later than July 17, 2022. The DVD screener should be labelled with the name of the film, director, and contact information. The online screener must be valid until October 3, 2022.

The applicant must fill in the online ENTRY FORM for the film to be accepted as a submission.

For each submitted film an application should be filled in. The organiser welcomes any complementary material concerning the submitted film.

The organiser is not paying the costs of the preview copies of enrolled films sent to the festival organisational body.

All unclaimed materials and preview copies become a part of the festival archive. Applicant agrees that the festival organizer may use the Czech subtitled version of their film for non-profit use (e.g., educational screenings at schools).

The organiser will notify the applicants with the result of the film selection by email no later than October 3, 2022.

The screening copies of selected films of other than Czech, Slovak or English language version have to be equipped with English subtitles and the applicant must provide the organiser with the original dialogue transcript and its English translation. Also, the applicant agrees to provide the festival with a finalised screener for translation purposes, as all foreign language films will be provided with Czech subtitles by the festival.

The costs of selected films may be covered by the organiser according to proper consideration.The organiser assumes the liability for the damage or loss of the copy of the selected films only in the period from  the reception of the film copy to its consignment to the filmmaker. The compensation for the loss or damage of the film copy in the said period is limited to the costs for the production of a new copy of the film as calculated from a regular pricelist.

The organiser does not pay any screening fee for the screening of films entered by submission.

The applicant permits Mezipatra to make a DVD copy of this work for a non-circulating festival archive.

All films participating in the competitions or having a premiere at the festival are expected to use the festival logo in their publicity and promotional material.

Applicant gives Mezipatra permission to use up to 3 minutes of footage or photographic stills from the work for broadcast, web publication or other promotional purposes.

Completion and submission of the entry form indicates the applicant’s consent to the Festival rules and regulations.