Actors about One in a Thousand: The shooting healed us, and it will heal the wounds of the audience too 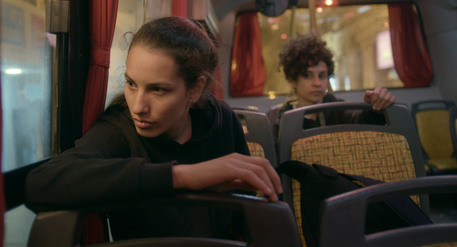 A bit non-traditionally, the Q&A for the One in a Thousand didn’t feature the director, Clarisa Navas, but the three main protagonists. But it was certainly worth it because during the shooting, a strong bond of a big close-knit family developed among the actors, the director and the whole crew. Watch the recording of the interview with Ana Carolina García, Mau Vila and Luis Molina.

The film tells the story of seventeen-year-old Iris who is expelled from school and spends the summer playing street basketball in a desolate concrete suburb in Corrientes, north Argentina. She is accompanied by her cousins, the openly gay Darío and Ale, who is searching for love as well as for his own self. When Renata, shrouded in bad reputation, comes to the neighbourhood filled with gossip and violence, Iris’s summer suddenly transforms.

The actors knew the place that served as a very important setting of the story very well. They come directly from Corrientes or the surrounding area. Moreover, they diligently prepared for the role by staying in the neighbourhood of the eventual shooting. “We had about four months for rehearsals. It was an opportunity to spend time directly in the streets, among the blocks of houses that appear in the film,” says Ana Carolina García who portrays Renata in the film.

Iris and her cousins feel as natural in the film as if they were an actual family. How was it possible to build such a relationship among the actors on screen although they hadn’t previously known each other? “I didn’t feel like we were shooting a big film. It was rather a community experience, pleasant and heart-warming. Clarisa helped us develop the relationships, the actors felt like brothers and sisters,” explained Mau Vila, who plays Darío in the film, and he added: “We weren’t just following some script. We were enjoying the process that was both acting and reality at the same time.”

And the screenplay, written by the director herself, was more of a guidance. The actors were encouraged to bring their own life experiences into the story. That way, they really lived the film, which was quite challenging. Luis Molina, the actor who portrayed Ale, admits: “I’m a theatre actor and the first days of shooting, I felt like I was learning to act all over again.” The film also features violence, which is, unfortunately, an inherent part of life in poor neighbourhoods. And the actors also brought their personal experience into the violent scenes. “We had to focus on recollecting the unpleasant things that had happened to us when we were younger. That’s also a part of our community’s life. At the same time, it gave us the strength to exist in such a world and face it,” said Ana Carolina García, the film Renata.

“This film has changed my life. It has truly healed my wounds. I feel different, first after shooting the film and then watching it several times as a viewer,” says Mau Vila, the film Darío. One in a Thousand still has not premiered in Argentina. The protagonists expect that it will provide the same healing to the Argentinian audiences that it has brought to them.