10 reasons why not to bail on Mezipatra 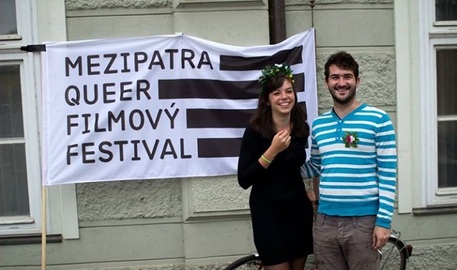 Each year, we make Mezipatra better than it was the year before. This is exceptionally difficult this year, because Mezipatra 2013 set the bar high – we lived La vie d'Adèle (Blue is the Warmest Color), we laughed watching Monty Python and greeted numerous extraordinary guests.

Now, we're starting from scratch again. To be able to say we did it again when this year's edition is over, we need your help. Those extraordinary guests? That's you – our audience. And if you're not part of our  udience yet, we'll give you several reasons to change that.

Mezipatra does't just offer films because they have gay, lesbian or transgender characters, but because the festival has high-quality films. That's why you can find three current candidates for the Academy Award for Best Foreign Language Film, award-winning pictures from Rotterdam and the Berlinale, as well as films that stole the show in Cannes or at the Sundance film festival. You can have a look at the program HERE.


2) Documentaries you didn't see in Jihlava

The festival cares about what is going on in the world, and that's one of the reasons why you will see the shocking documentary Children 404, about the never-ending misery of queer youth in Russia. Not long ago in Russia, screenings of the film were crashed by police. Fortunately, at the Mezipatra screening, the only cops you’re likely to see will be
a couple on a date. Thank God. Also mark in your calendars the screenings of the thrilling The Ring and The Out List.

3) Everyone has time for a short film

If you want to complain about having to work during the weekend or not feeling like getting out of bed, we've got a solution. Go to one of the blocks of seven short movies. We have 48 short movies from 21 countries, all with gay, lesbian or  ransgender themes, so statistically speaking, it's impossible you not to hit the jackpot a few times. You can pick a short film HERE.

4) Retro you won't see anywhere else

Did you know that we offer films other festivals don't have? And have never had? And most likely will never have? One of them is Heavenly Creatures, directed by Peter Jackson and featuring Kate Winslet and Melanie Lynskey as young murderers who steal the show. Don't miss this exclusive screening for which our program director spent numerous nights bartering. How she finally managed to get the film, we might never know. We only know that for you, the cost to see it is a short trip to the Lucerna cinema. The complete retrospective section can be viewed HERE.

5) Neons, Madonna and our Urxins

You never leave a Mezipatra party at midnight because you're bored. And if you tried to deny it, we have incriminating photos of you taken at 5 a.m. The biggest party of this year's edition is Saturday's “Blond Ambition” in Neone Club and The Chemistry Gallery, which will connect Madonna, the ‘90s, electro, Lunchmeat and DJs from Prague, Bratislava and Berlin. Madge wants you HERE.

Mezipatra is one of the hottest fall events in Prague. You will run into friends in between screenings, and you'll meet new friends. You'll also meet the Mezipatra team. How will you know it's them? They'll be running between Lucerna and Světozor, and they'll have circles under their eyes.

You can't really make the most out of watching films if you lack the context – or worse, if you're hungry. So choose from our three debates – about vampires, emancipation of marriage, and queer motives in domestic movies. Debates will be held in the Langhans Gallery and Café Neustadt, and they'll be led by experts. And when it comes to that hunger problem, come and enjoy an excellent brunch. Complete info HERE.

8) Screening for the blind

Mezipatra will offer an exceptional experience – a screening of The Way He Looks for blind audiences, accompanied by an audio description in Czech, will be held on Sunday at 6:15 p.m. Everyone else will be given the option of taking a scarf at the entrance to cover their eyes and that way experience how a blind person would experience the movie. You will be able to sympathize better with the main character – a blind teenager named Leo who falls in love for the very first time. The Way He Looks won the Teddy Award at the Berlinale, and it is representing Brazil for the Oscars!


9) Guests from all over the world

The abovementioned Children 404 will be presented by its courageous directors Askold Kurov and Pavel Loparev. They won't be the only guests of the festival. Iconic director Monika Treut will introduce her drama about a love triangle, Of Women and Horses, which was crowned the winner of the Rotterdam festival, and the Swedish film Something Must Break will be introduced by a large delegation. Furthermore, we are very exited to welcome Eric Schaeffer, who directed the wonderful new film Boy Meets Girl.

There's no reason for you to be to be scared to come to Mezipatra. There's hardly a friendlier, relaxed and more open event around – as confirmed by 10 out of 10 of our straight team members' boyfriends, and 0 out of 0 girlfriends of our gay team members!