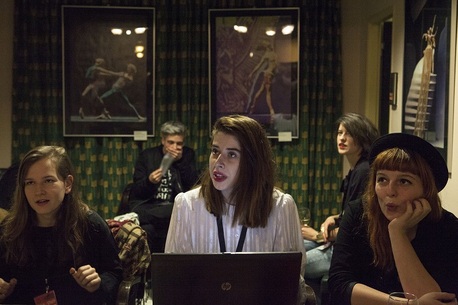 When there's so many visitors at the festival's opening ceremony that they almost can't fit in the movie theatre, it can mean a lot of things. Either the event's host is Marek Erben, stuff is handed away for free or an awesome festival is about to start-- believe it or not, in Mezipatra‘s case, all the three options are correct.

Well...Mr. Marek Erben had to pop out to host a dance at the Marble Hall so actors Jan Cina and Petr Vančura filled in. And not just them. Kuba and Tonik, stars of the 15th Mezipatra trailer, co-hosted too. Honza and Petr, therefore partially hosted the ecent and partially defended Kuba and Tonik from all the gays who wanted to adopt them.