Tantehorse: "I was born a girl. But I know for sure that it was a mistake." 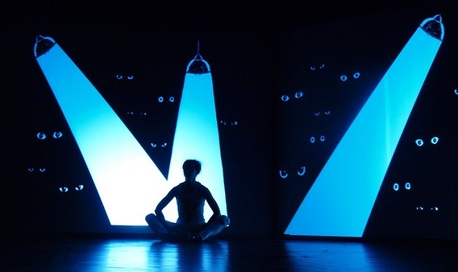 On Tuesday, November 18, Brno theatergoers had an extraordinary opportunity to see, within the associated program of the Mezipatra Festival, the dance and visual performance S/He Is Nancy Joe by the theater group Tantehorse.

In an exceptional one-woman show the dancer Miřenka Čechová dealt with transgender themes in an original way. In the story of a boy trapped in a girl's body the physical and visual aspects of the performance are perfectly combined and made even more impressive due to an excellent musical component.

The performance was ranked among the best cultural achievements of the year 2012 in the category of Best Dance 2012 announced by the Washington Post newspaper. Also, last year in August it won the Herald Angel Award at the world's largest festival of theater and dance, the Fringe Festival in Edinburgh, Scotland. Apart from being an extremely talented artist, Miřenka Čechová is also an extremely nice young lady, who, before the show, found time for a brief chat about the performance S/He Is Nancy Joe as well as about her other projects. An opportunity even more precious, the very next morning she was to fly to New York and had to move the departure date because of the performance. As she said, if it was not the Mezipatra festival that she likes so much she would probably cancel such a performance due to a long and difficult journey.

When asked what inspired her to create a show dealing with transgender themes and how long it had taken to originate, she said that the concept of the performance had its origins when being on her Fulbright scholarship in the USA in 2011. For a topic that interested her in the long term, she was trying to find a suitable form and way of expression. After returning to the Czech Republic she began to meet transgender people and all members of the project team. "One of my sister is transgender and the other sister is a psychologist, so this topic is quite personal for me," she says, adding: "In my view normality does not exist at all, it's just about how much difference is seen."

The S/He Is Nancy Joe show was played with great success at a number of international festivals, including the Edinburgh Festival, where it was played sixteen times. In the Czech Republic, theatergoers can see it about seven times a year, the remaining number of performances being held abroad. Most of the audience accepts the performance warmly and with understanding. "Theatre form is very open and the communication gets across to the audience in a way that can touch everyone, no matter what their previous experience is, which was my intention," says Miřenka.

The dance performance has a fixed frame and the exact length, because the stage movement is connected with the image and soundtrack. The picture and sound are an integral part of the story and without them the show could not function. Individual performances can vary, not in length but in content, which is always very dependent on the audience. "Each country and each cultural context have different reactions which tell something mainly about the spectators themselves," says the dancer, adding: "In Poland I also met with negative reactions and people there told me that I was crazy to do this topic. On the other hand, in Korea they told me that for them this problem did not exist and they invited me to the festival mainly because they liked the visual form of the show."

Great experience Miřenka gained at a festival in India where the theater hall was packed with spectators and the performance was a great success. The local culture has experience with members of the religious sect Hijri and even if the attitude of the majority to the people of the third sex quite ambivalent people have known this topic.
The performance also attracted great attention in the United States. "I think that there was needed the most. People there like to discuss and ask questions and I like it, too," she says and continues: "For me it is always the strongest experience when someone comes after the show and says that it is his story, which happened in India, in the USA, in Scotland and in this country, too."

In the Czech Republic the show was also played for the second level of elementary schools and was followed by meetings with experts on gender studies and psychology as well as by other lectures at schools. "I take it as a kind of enlightenment, but for me it's also a very personal topic. People who are personally involved in the performance experience their catharsis. They are grateful that the show was created and for the fact that ultimately it does not end badly. For example, in India there was already an applause at the penultimate scene which seemed to suggest that the show would result in the death of the main character because the audience expected an unhappy ending," says Miřenka.

This performance, however, does not have a bad ending. On the contrary, it carries hopes, and thanks to its profoundly human content and exceptional visual power affects everyone in the audience regardless of their orientation or gender.
It is one of the most scenic and interesting achievements that you should not miss. You will have an opportunity to see it until the end of April in the Ponec Theater and I highly recommend not to miss it because then Miřenka Čechová is going to spend some time in the USA and will be returning to the Czech Republic only for occasional performances.