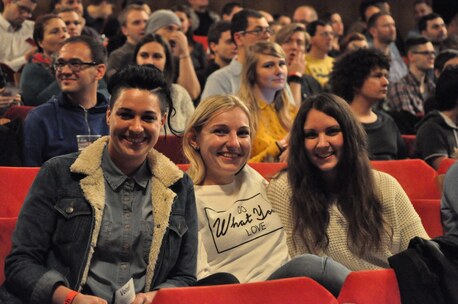 This year’s edition of the Mezipatra QFF was again a great success: over the two festival weeks, 66 queer-themed films were presented to a total of 11,700 viewers. In addition to the feature film competition and six documentary films, a retrospective section and a special screening of 54: The Director's Cut, the audience could enjoy seven short film programmes.

Although the main programme of Mezipatra QFF is now over, we do not say good bye. We offer you festival events throughout the whole year: festival’s regional echoes will this year visit Olomouc on November 18 to 22, following a premiere of MQFF in Liberec: on November 27 to 29. The audience in Prague is regularly treated to a series of film screenings under the title of Mezipatra Approved and in August 2016, our traditional open-air cinema will hit the town as part of the Prague Pride festival. For more details follow Mezipatra QFF on Facebook or visit our website at www.mezipatra.cz.

You can let us know how satisfied you were with this year's festival by filling our questionnaire.