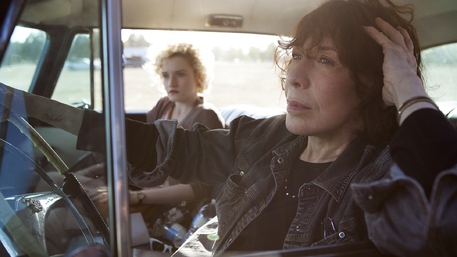 The third event of Mezipatra Approved will be a unique screening of Grandma. The independent comedy enchanted audiences at Sundance as well as at last year's Mezipatra.

The film is ruled by the American comedienne Lily Tomlin as quirky grandma Elle who is trying to deal with the death of her long-term partner. She also breaks up with her current girlfriend, and she decides to help her granddaughter Sage (Julia Garner) get the $630 needed for an abortion on top of all that. Together, they set off on a journey to visit old friends, lovers of both genders, and also Sage's dreaded mother (Marcia Gay Harden).

Paul Weitz's comedy road-movie on the silver on screen is a unique opportunity - only as a part of Mezipatra. And after the film, you're invited to the Summerphilia afterparty at (A)VOID Floating Gallery boat, which is anchored at Vyton. Starring festival resident DJs Urxins and Aid Kid. See you there!