Do you have an opinion? Come and discuss it with us 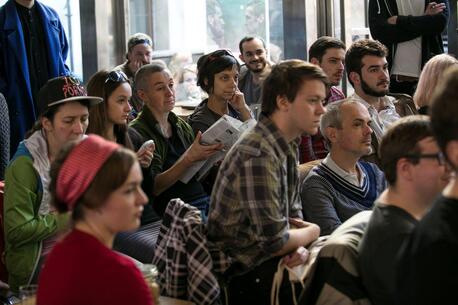 Discussions, lectures and Q&As have always been a key part of Mezipatra. We won't rob you of them this year either – in Prague, experts will talk about the phenomenon of chemsex, and the American filmmaker Rhys Ernst will guide you through the trans* movement history in an interactive discussion. In Brno, experts will focus on such diverse topics as queer literature, sexual assistance, and changes brought by the Velvet Revolution. And both cities will discuss the current issue of same-sex marriages.

In Prague, it's good manners to continue the Saturday party with Sunday brunch where you can not only eat and drink well, but also learn something interesting. This year, the brunch takes place in Langhans and will be followed by a discussion about the phenomenon of chemsex – drugs consumption during sexual activities, which can even lead to addiction. The speakers will be the social geographer Michal Pitoňák, the chairman of the AIDS Help Czech Society Robert Hejzák, and the sociologist Jan Morávek., hosted by Bára Šichanová from Wave Radio.

Sunday afternoon belongs to an interactive discussion with the American filmmaker Rhys Ernst. He will comment on his web series We've Been Around, where he focuses on forgotten figures of trans* history, and he will also speak about the current situation around trans* activism. Hosted by Viktor Heumann from the Trans*parent Prague association.

On Tuesday, 8th November, the visitors of Kino 35 can enjoy a double program. After the screening of documentary Freedom to Marry, which will let you experience the atmosphere of the last days of the American campaign for same-sex marriage legalization, you can plunge directly into a heated debate. The situation in the Czech Republic, the potential for legalizing marriage for everybody and same-sex families will be discussed by Vladimír Špidla, the Chief Aide to the Prime Minister, sociologist Petra Kutálkova, and producer Janis Sidovský. Hosted by the co-founder of Prague Pride, Czeslaw Walek.

Viewers in Brno won't miss anything either, they can see the documentary on Wednesday, 16th November, in the stylish venue of The Distillery hub. Czeslaw Walek will host the discussion again, and the speakers will be politician Barbora Antonov, Tomáš Langášek from the Supreme Administrative Court, Kateřina Nedbálková from Masaryk University, pastor Martina Kadlecová, and Petr Polák from the Ombudsman's Office.

The Distillery will host one more film on the same day. The Spanish documentaryYes, We Fuck!, which shows sex life of handicapped people and the work of sexual assistants without unnecessary clichés and scandalizations, will be screened as a part of the Open_space platform. Afterwards, there will be a discussion with guests from an STD prevention organisation, Rozkoš bez rizika, which also focuses on this still taboo topic.

Are you interested in queer history and literature? You can look forward to two lectures within Mezipatra Talks which take place on Monday, 14th November in Bajkazyl café in Brno. Professor of literature Stanislav Zajíček will guide you through Petronius's Satyricon and the circumstances of its creation, and Miroslava Novotná from the Paedagogical Faculty of the Masaryk University will then introduce the life and work of Arthur Rimbaud.

Behind the Iron Curtain: that's the name of a debate planned symbolically for Thursday, 17th November. Witnesses in Bajkazyl will recollect the revolutionary year of 1989 and illustrate the development in the last decades. Hosted by representatives of the Society for Queer Memory.