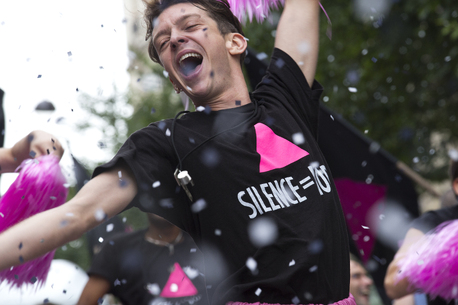 In cooperation with Be2Can we present the French film 120 BPM. This year's third evening of the Mezipatra Approved series takes place in the big screening hall of Lucerna cinema on October 5 at 20:00.

Director Robert Campillo will take you to the 1990s. AIDS had been brutally wiping out its victims for a decade now, yet activists from the Parisian ACT UP movement keep struggling against public disinterest, governments' apathy, and machinations of pharmaceutical companies. Newbie Nathan meets Sean, the radical of the movement whose political fight is also the fight for his own life. Sean is HIV positive and his time is running up...

Partially based on personal experiences of the director and his co-writer Philippe Mangeot, the film premiered in Cannes this year. It won not only the Grand Prize of the Jury, but also the Queer Palm and the FIPRESCI Prize.

Before the screening, we have prepared a discussion with experts on the life with HIV/AIDS in the Czech Republic. What is the life of the sick like now, compared to after the Velvet Revolution? What about the situation around the organizations working with high-risk groups and offering for example anonymous testing? The discussion starts at 6 pm and is hosted by Aleš Rumpel, the chairman of Mezipatra organization.