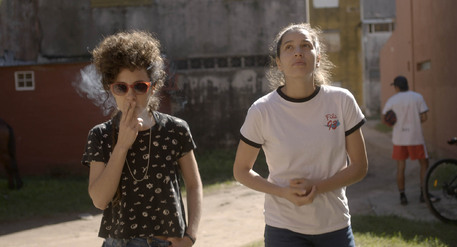 Mezipatra is visited by about 10.000 viewers in Prague, Brno, and regional cinemas every year. However, owing to the current epidemiologic situation, the festival will take place only online for the very first time. All films will be available at Aerovod.cz from November 5 to 21. The price for watching one film will be CZK 80. Moreover, there will also packages available.

Mezipatra will introduce 11 feature films in the main competition, newly including also documentaries. There will also be the traditional festival opening and closing, this time as a live stream at Moje kino LIVE platform. The complete festival program is already available at Mezipatra.cz.

“To prepare a festival in a pandemic posed an unprecedented challenge for us,” says festival director Pavel Bicek. “This year has represented an absolute destruction of the film industry status quo. Many festivals didn’t take place at all, others went online, and others still only published the program that would have been offered had it been possible. Simultaneously, films stopped being shot or finished for various periods of time. In such a film vacuum, our programmers were facing an incredibly hard challenge to put the program of this year’s Mezipatra together, but they have succeeded. And I have to note that we have one of the best programs that I remember,” he concludes.

The film selection is in the spirit of the theme of “Recovery”, drawing attention to the mental and physical health of the queer community. The most eagerly awaited films of this year include the captivating gay Odyssey of Dry Wind (Vento Seco), which depicts the limits of monogamy, perceiving it as an obstacle to true pleasure. Audiences will experience untamed sexual fantasies under the scorching Brazilian sun with the main protagonist, Sandro. This provocative film world-premiered at this year’s Berlinale. South America offers two more films in this year’s program. Young Hunter (El Cazador) focuses on the potential danger of dating apps. And One in a Thousand (Las mi y una) is set in a poor Argentinian suburb, depicting a budding relationship of two girls, filled with questions and introspection.

The lives of the young generation are shown in No Hard Feelings (Futur Drei). Paris’s parents are from Iran but he grew up in a sleepy German town. The youth is therefore not sure where he actually belongs. This colourful story about the search for one’s identity, friendship, trust, and the need to belong deservedly won this year’s Teddy Award. Self-acceptance is the challenge for David, a son of Russian-Jewish immigrants in Minyan. It’s because it is the 1980s in New York and he finally has a chance to peek into the exciting environment of the gay community. But the wild life starts taking its toll. Freedom and independence are also crucial for teenage Lola. But her opinions clash with the yokel, conservative nature of her father for whom the idea of traditional family happiness is sacred. The heroine’s emotional transformation was remarkably portrayed by Mya Bollaers, a rising trans actress who has been nominated for several European awards for her performance and won the prestigious Magritte Award for the Best Actress.

Claire Oakley’s Make Up depicts the distressing coming-of-age process with all its confusion about the new world and one’s own identity. And it does so in an original form, blending horror, psychological drama and lesbian romance. South Korean Between the Seasons also offers mystery, focusing on love between two girls in a society where personal happiness and otherness don’t go hand in hand. Audiences may also look forward to the latest film by the director and enfant terrible Bruce LaBruce, Saint Narcisse. Twenty-two-year-old Dominik has a bit of a fetish – the only thing that can arouse him is his own image. So he spends most of his time taking polaroid self-portraits. However, his quiet days filled with self-love are disturbed by the news of the death of Dominik’s loving grandma and the revelation of major family secrets… The drama tells a story of revenge that might lead to redemption, but also to final destruction.

The documentaries in the main competition are represented by Little Girl (Petite fille) from France, about boundless parental love. Seven-year-old Sasha has always known she’s a girl. Her parents and siblings accept her true identity, but outside, and especially at school, the family faces obstacles and a lack of understanding. Always Amber shows the life of seventeen-year-old non-binary Amber and her best friend Sebastian as they live a carefree life full of dreams and parties, without considering what comes tomorrow. But the idyllic world clashes with reality, love, inhibitions and misunderstandings.

Contact for media
Leonora Nushi
This email address is being protected from spambots. You need JavaScript enabled to view it.
608 910 494