The winner of Mezipatra is the American drama We the Animals. From Thursday, the festival continues in Brno. 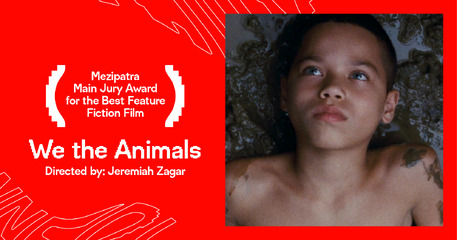 The Prague part of Mezipatra Queer Film Festival finished on Wednesday, November 15th. The prize for the best live-action film was awarded to American We the Animals by director Jeremiah Zagar. The film is based on an eponymous autobiographic novel by Justin Torres, discussing the growing awareness of different sexuality in a highly masculine environment through the eyes of a child. The film was successfully presented at this year's Sundance, where it won the NEXT Innovator award.

“We the Animals is a fragile coming-of-age story which smartly employs cinematic means to achieve a dreamy atmosphere and to depict a young boy's fantasies. And the unmatched performances of the young actors also played a role in the selection process, singularly emphasizing the film's overall impression,” explained Mezipatra's main jury their choice.

The jury decided to award Special Mention to French Sauvage about a young male prostitute looking for love in the harsh street milieu. Camille Vidal-Naquet's directing debut enchanted the film experts thanks to Félix Maritaud's acting performance and the film's overall atmosphere.

The winner of the short film competition is Pre-Drink by director Marc-Antoine Lemire. It focuses on a trans girl and a cis boy who have been friends for ages. But one evening, they decide to explore their relationship from a different perspective. The student jury appreciated especially the film's credibility.

“We were interested in sensitivity to the topic, empathy for the viewer, effortless work with film language, and a higher contextual dimension. We have decided to award the film that provoked us most. We are aware of the risk that it is a highly generational film, but it left the biggest impression,” revealed the jury members.

From Thursday, the festival continues in Brno, where visitors can look forward to the opening ceremony and the Austrian drama L'Animale. Mezipatra will stay there until November 23rd. And it is followed by echoes in Olomouc between November 27th and December 1st.