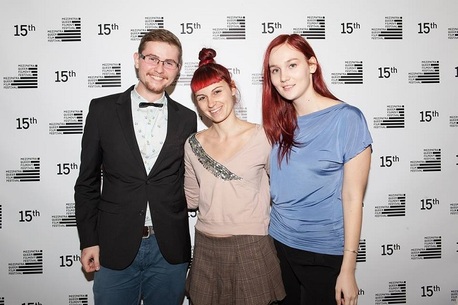 Adéla Mrázová
Adéla graduated from the Dance Center Conservatoire in Prague in 2008. Since 2010 she's been studying Film Studies at Charles University, getting her bachelor's degree for a theoretical thesis on, DV8: Male Body in the Genre of Dance for Camera. She focuses on the genre of dance films and on the issue of male body depiction. She also concentrates on festival programming, film distribution, and the NaFilm concept of the National Film Museum.

Elina Osipova
Elina Osipova studied Interactive Media in Art and Design at Prague College and will continue there with her studies with a focus on non-linear storytelling and live editing. Attending high school in Russia – on the border of Europe and Asia and of contrasting cultures - taught her to accept otherness. Later she studied German and English Philology. As a member of the cinematography club, she was trained in analyzing controversial cinema. Her other activities include script writing, staging, and acting.