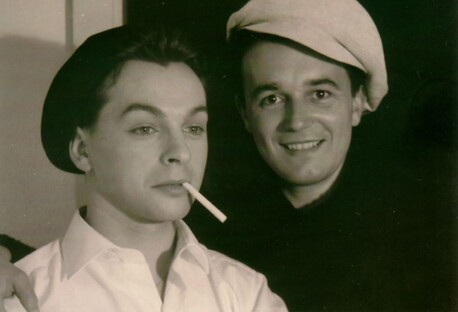 The 15th annual Mezipatra Queer Film Festival, which starts in Prague on Thursday, Nov. 6, will provide its audience with 73 fascinating stories and unique visions from their creators. All 73 films comprising this year's edition are queer, which means their topics center around alternative sexual or gender identity. More importantly, they fit into the topic of “Till death do us apart”, which resonates in many forms. “We are watching with excitement how more and more countries have equal marriage. We are protesting against outrageous legal restrictions and public condemnation. This year's Mezipatra program involves first loves that the couples hope will last forever, relationships that last decades and those that end too soon and leave survivors who have to move on," says Aleš Rumpel, the festival director, describing the mood of this year's program.

The Way He Looks (Hoje Eu Quero Voltar Sozinho), which received the Teddy Award at the Berlinale and is Brazil’s official entry for the Best Foreign Language Film at next year’s Oscar ceremony, will be screened at the festival this year. Mezipatra has prepared a special dubbed screening with an audio script for blind viewers in cooperation with Světluška and the Czech Radio Foundation. Another candidate for the Oscar in this category, which also features on the Mezipatra program, is the Swiss documentary The Circle (Der Kreis), in which Ernst Ostertag and Röbi Rapp reminiscence about the 1950s, when the gay community in Zurich, at the time still an island of freedom for homosexuals, started to be monitored by the police. Another film on the program, Children 404, also deals with state repression. It is a chilling, authentic and completely uncensored probe into the lives of Russian queer youth, who have to put up with Putin’s regime and the so-called prohibition on the promotion of homosexuality. "Fifty-five teenagers are fighting online against rising homophobia in a documentary that might as well be a science-fiction film from the dark future. It is a report from the Middle Ages to which Russia has returned. This film earned a standing invitation at the Toronto International Film Festival," says Lucie Kajánková, Mezipatra’s program director.

Another film that has been greeted with enthusiasm is the French comedy Me, Myself and Mum (Les garçons et Guillaume, à table!), inspired by the story of the teenage years of a rising star of French cinema, Guillaume Gallienne. What is it like to grow up with two athletes, when your favorite thing to do is to imitate an empress, and you don't really fit in? The film depicts the most bizarre coming-out scene imaginable and won an award at Cannes and four César awards, including for Best Film, with lots of love from French audiences.

Teenage years and their first fragile loves that will (or will not) last forever make their appearance in other festival films as well. Of Girls and Horses (Von Mädchen und Pferden), a new drama by legendary director Monika Treut, presents a love triangle that shakes up the calm nature of the Baltic, as troubled teenager Alex arrives on a remote farm, discovers peace and the beauty of horses and meets the locals. Fascination and desires are also the themes of the teen romance Boy Meets Girl, in which transgender Ricky (wonderfully portrayed by Michelle Hendley) is looking for love. However, that turns out to be a problem in rural Kentucky. Will the lovely, smiling Republican Francesca break it off?

First loves are replaced by firm, year-tested relationships. “Till death do us apart” is a topic close to the hearts of Ben (John Lithgow) and George (Alfred Molina), who have spent 39 years together. They decide to make their bond official, but George's employer is about to have an unpleasant reaction to it. The tragicomedy Love is Strange is director Ira Sasch’s comeback after his autobiographical drama, Keep the Lights On,won the main prize at Mezipatra two years ago.

Tom at the Farm (Tom à la ferme), directed by Mezipatra favorite Xavier Dolan, will show us the bitter end of a very strong bond. In this psychological thriller, the young Tom arrives at the funeral of his beloved partner, Guy. On an isolated farm, he meets Guy's violent brother and mentally unstable mother, who was expecting the arrival of her son fiancée. This brilliant study of mental degradation escalates to inner horror.

The Hunger, directed by Tony Scott and starring Catherine Deneuve, is also close to being a horror movie. Deneuve portrays a beautiful, charming, millennia-old vampire femme fatale. She enjoys hunting innocent victims at bars in New York City with her husband John (David Bowie) and playing the cello. Suddenly, mortality comes to their lives accompanied by salvation in the form of a doctor, Sarah (Susan Sarandon). "This original horror film is now a queer film classic, and it is memorable because of its superstar casting and also for having one of the most sensual lesbian scenes in the history of film," Kajánková says.

You can find the complete program at www.mezipatra.cz.

The best movie of this year’s Mezipatra will be selected by Bill Guentzler (artistic director of the Cleveland International Film Festival), Peter Knegt (journalist and a filmmaker) and Pavla Jonssonová (university professor specializing in gender studies).

The 15th edition of the Mezipatra Queer Film Festival Mezipatra takes place Nov. 6–13 in Prague and Nov. 15–22 in Brno.