Brave Russians, a trans actress and Monika Treut at Mezipatra! 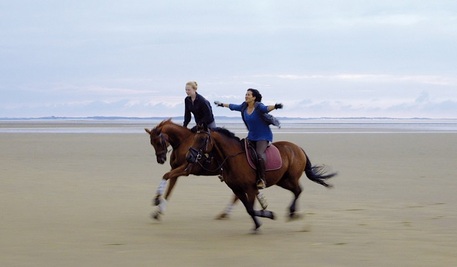 Askold Kurov hasn't always been a documentarian. He used to work as a designer, but he soon grew bored of his job. He started studying documentary film and last year, he and his colleague, Pavel Loparev, decided to focus on a very personal topic of theirs.”I grew up in the Soviet Union and I had no idea whatsoever that it is normal to be gay, or that there are any other homosexuals in the world. Then I found out that Russian teenagers today experience something similar. They struggle both with the enormous homophobia from the outside and with the inability to accept themselves,” says Kurov.

He and Loparev therefore focused on the online group of “Children 404” which has been uniting Russian LGBT teenagers who in reality face never-ending humiliation and bullying. The two documentarians have made the Children 404 documentary which will be screened at the 15th edition of Mezipatra Queer Film Festival and which received standing ovation at Toronto festival. Askold Kurov and Pavel Loparev, the creators of the film consisting of shocking testimonies of 46 Russian LGBTQ people, will introduce the picture in Prague and tell the audience for example how the Russian establishment and nationalist groups tried to disrupt their film's screening. They will also reveal the fact that they talked to the “Children 404” only through the internet for their safety.

Another distinguished guest of this year's Mezipatra, the living legend of queer cinema and the queen of punk, Monika Treut from Germany, is also associated with documentary film. Yet she will not introduce a documentary this time, but her latest lesbian drama, Of Girls and Horses (Von Mädchen und Pferden). “I met Monika at Berlinale where she told me about the film she had just finished. I already knew at that time that we would like. And we do. It is a beautiful tale of growing up, friendship, and love,” explains Lucia Kajánkova, the Program Director of Mezipatra.

The festival will also welcome the delegation of Swedish Something Must Break (Nånting måste gå sönder) which won Tiger Award, the main prize at Rotterdam festival. The film was directed by Ester Martin Bergsmark who was awarded the Special Mention of the Main Jury for She Male Snails  at Mezipatra two years ago. His latest unusual romance about an androgynous boy who dreams of being a girl and meets the alluring punk Andreas was based on a novel by transgender artist and activist, Eli Levén. And it is Eli Levén who will visit Mezipatra. He will be accompanied by the film's lead actress who played the role of Sebastian/Ellie, Saga Becker. “It is the first film experience for Saga. It is truly exceptional that Saga is transgender and also plays a transgender character. This is a new trend in queer cinema, which is followed also by Michelle Hendley, the lead actress in Boy Meets Girl, which we are also screening,” clarifies Kajánková.

Another guest will come to introduce the sweet American romance, Boy Meets Girl. The director, scriptwriter and actor, Eric Schaeffer from New York, directed for example Sarah Jessica Parker and Ben Stiller, but he also worked as a taxi driver. “I wanted my film to be positive and sunny and to uplift the viewers. I also wished for my characters to be truly alive and authentic. Not limited by categories of hetero/bi/gay/lesbian/trans,” says Schaeffer.

The best film of the 15th edition of Mezipatra will be selected by a three-member jury consisting of Bill Guentzler (Artistic Director of Cleveland International Film Festival), Peter Knegt (Variety and Indiewire journalist and a filmmaker) and Pavla Jonssonová (a university lecturer specializing in gender).

Apart from the aforementioned films, Mezipatra will offer also a strong section of short films. The viewers will see 48 animated, documentary, live-action and musical films from 21 countries which were made by talented students as well as by experienced professionals. Each film somehow touches the topic of Until Death Do Us Part. The films will be presented in gay blocks, Swan Songs, Love Rites and Bestiarium, lesbian blocks named Dear Sapho..., Signs of Destiny and You Only Live Once, and a trans block called Who Do You Think You Are?

The complete program and more information are available at www.mezipatra.cz/en

This email address is being protected from spambots. You need JavaScript enabled to view it.