The winner of Mezipatra is indie comedy Adam. From Friday, the festival continues in Brno. 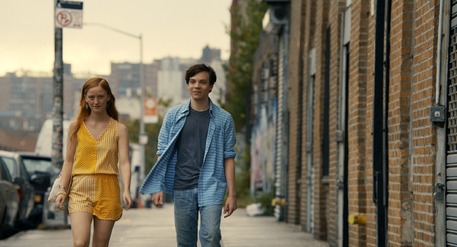 On Wednesday, the closing ceremony marked the end of Mezipatra's 20th edition in Prague. The prize for the best feature film was awarded to Adam, an indie comedy by director Rhys Ernst. Based on Ariel Schrag's bestseller, Adam follows a seventeen-year-old boy who comes to visit his sister for summer holidays. Adam is excited and hopes to get a girlfriend. But he soon realizes he is plunged into the world of queer bars and happenings. When he falls for Gillian, who thinks he's a trans boy, he suddenly faces a difficult decision. Will he tell her the truth? This film about the importance of friendship and honesty in the queer community premiered at Sundance film festival.

Mezipatra's main jury appreciated especially Adam's ease and acting performances: “Through its humorous, intelligent, and daring depiction of the complexity of queer identity and the gender spectrum, this film left the jury in an energized state of mind. We were deeply moved by this contemporary story of our community’s challenge to grow closer together, told through thoughtful, nuanced direction and carried by the strength of its incredible performances.”

The winner of the Short Film Competition is Dawid Ullgren's Crash and Burn, Honey (Miss Inga Issues). It follows ageing Cimon, who has been escaping from his lousy life into the world of drag queens for fifteen years. He hasn't been able to make his dreams a reality, he is practically broke and now he's even lost his job. The stage and booze are suddenly not enough of a lifeline. Yet there's a ray of light when the phone rings with an offer he can’t refuse. When reality is merciless to Cimon, will it be more merciful to his alter ego? Rhys Ernst and Dawid Ullgren have accepted the awards at the closing ceremony in Prague in person.

According to the student jury, the film depicts real problems of the queer community: “Through a genuine, powerful performance of the leading actor, this intimate portrait reflects not only wasted dreams, missed opportunities and toxic masculinity, but also brave decisions carried out despite their consequences and harsh reality.”

On Friday, Mezipatra is moving to Brno, where the audience award winner will be announced and the festival will continue until Friday, November 22, followed by regional echoes.